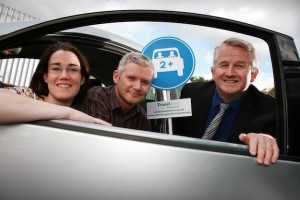 Car sharing saves over Â£1 million
Over a million pounds will be saved over the next year due to a rise in car sharers in 2010, it was revealed by Travelwise NI during Car Share Day (20 September 2010).

The Department for Regional Development’s Travelwise Car Share scheme currently has over 3300 registered members, an increase of over ten per cent this year. Current estimations project that sharers can save 5.5 million miles of travel and are currently saving up to Â£1.1million and 1800 tonnes of carbon dioxide.
These statistics come as commuters are being urged to try car sharing next Monday, the official âcar-sharingâ day during Travelwise Week 2010.
The theme for Travelwise Week is âTravel Smarter, Live Betterâ. The week is held in conjunction with European Mobility Week which aims to promote